SCSPE Engineer of the Year

It is the policy of the South Carolina Society of Professional Engineers to promote, support, and encourage the continued professional development of engineers.  To this end, the Engineer of the Year Award was established.  The Engineer of the Year Award is the highest award given to an individual by the society. It may be given annually by SCSPE to an engineer who has made outstanding contributions to his or her profession, public welfare and/or mankind.  The winner of this honor may then be the SCSPE nominee for the NSPE Distinguished Service Award the following year, if all NSPE requirements are met.

Engineer of the Year Recipients

SCSPE Young Engineer of the Year

It is the policy of the South Carolina Society of Professional Engineers to promote, support, and encourage the professional development of young engineers.  To this end, the Young Engineer of the Year Award was established.  SCSPE may select annually an outstanding young engineer.  The recipient of this honor may then be the SCSPE nominee for the NSPE Young Engineer of the Year Award the following year, providing all NSPE requirements are met.

Young Engineer of the Year Recipients

Service to the Profession Award 2019 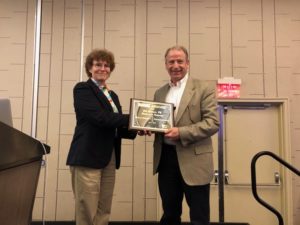 Joel Sprague, PE (Greenville, SC), was given the South Carolina Society of Professional Engineers Service to the Profession Award on June 7, 2019, at the SC Engineering Conference & Trade Show held at the Hyatt Regency Greenville, SC.

Sprague, a native of rural Michigan, graduated from Clemson University with a Bachelor of Science in Civil engineering in 1979.  He went on to get a Masters of Business Administration from Queens College in Charlotte, NC before obtaining his Masters in Civil Engineering from the University of South Carolina.

He started his professional career at Duke Power in Charlotte.  From there he has worked as a project engineer, the manager of engineering services, and senior engineer before founding his firm.    In 1992 Sprague became a Senior Consultant at Sprague & Sprague Consulting working with his beloved wife Gaye.

Currently, he is the Senior Engineer and Technical Director of TRI Environmental in Greenville, SC.

He’s given back his entire career.  He’s published too many papers to list and written chapters on engineering  in books.  Sprague shares his engineering experience by presenting at conferences, schools, and universities.

He’s been a member of SCSPE/NSPE since 1986 where he served in the Piedmont Chapter.  He served two terms as a Trustee of the SCSPE Educational Foundation.  He’s a member of ASCE and several other Technical Societies.

Sprague coached youth sports and served on PTAs when his children were young.  He has been active in his church and supported his wife’s public service and County Council races.

“Sprague is and has been an incredible member of the South Carolina Society of Professional Engineers, but his dedication to the profession is like no other.  There is no engineer more deserving of this award,” said Adam B. Jones,  SCSPE Executive Director.