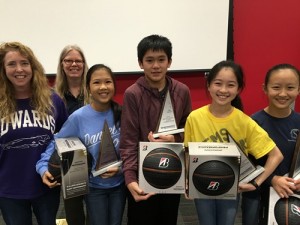 SCSPE sponsored the South Carolina MATHCOUNTS championship on March 19, 2016 at Bridgestone Aiken County Off Road Tire Plant in Trenton, SC. This year, 12 middle school teams and 12 individuals competed to select South Carolina’s State MATHCOUNTS team, who will represent the state at the national competition in May.

The competition consisted of three timed rounds of written math problems. In the first round, the Sprint Round, competitors answered thirty questions without the use of a calculator. The Target Round was comprised of eight problems in series of two. Calculators were allowed. In the final Team Round the school teams of four, together, solved ten problems.