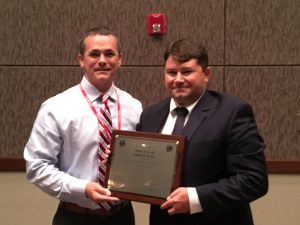 Norris currently is a Senior Design Engineer at Flour in Greenville where he is the Mechanical Department Unit Organization Manager.  He is responsible for leading the process mechanical engineering potion of complex large and small projects.  He works on both international projects and those in North America and Saudi Arabia.

Norris is also active in his community where he just finished a two year term as a Loaned Executive for the United Way of Greenville.  He volunteers with Meals on Wheels as well.

He is a husband to Jenny and a father to Allie, Libby, and Ella.  In his spare time he enjoys biking, kayaking, camping, playing softball, and spending time with his family.

“Norris is the volunteer’s volunteer, and is someone we are glad two have on both the SCSPE Board of Directors as a Chapter President, and as an officer in the SCSPE Educational Foundation.  He’s always there to lend a hand,” said SCSPE Executive Director, Adam B. Jones.